Kamaishi will host the Rugby World Cup. When I first heard this news, a certain memory sprang to mind.
The real-life fairy tale of October 7, 1981.
The location was Kamaishi City, Iwate Prefecture. The Kami-Nakashima Sports Ground – what had previously been little more than an empty field. The children of the steelworkers who lived in the company housing nearby called it “Field Number Six”, and used it to play casual games of baseball and tag. A proper grandstand on a ground like that would be laughable. It resembled a field of grass more than a sporting turf, and had a slight incline towards one end, giving the team on the lower end of the field a harder time pushing against the higher team in the scrum.
And yet, there on that field gathered a crowd of 15,000. Not 1,500. Fifteen thousand. In those days, the entire population of Kamaishi would have been just over 60,000.
The Nippon Steel Kamaishi Rugby Football Club was in the midst of its golden age, having just won a third consecutive national championship, and invited Ponsonby, a champion club from New Zealand, to play on that crude sporting ground. An absurdly large crowd of all ages gathered to watch the spectacle.

On March 14 this year (2015), Scrum Kamaishi, a non-profit organisation, hosted the “Tohoku & Christchurch Disaster Recovery Charity Event” at Tokyo’s Marunouchi Building.
Jiro Ishiyama, a former Kamaishi rugby player and national champion, and the man single-handedly responsible for initiating the Rugby World Cup host city bid, was the event’s keynote speaker, despite being a man of very few words. Gripping the microphone, he remarked, “The fact that I’m talking this much just goes to show how powerful rugby really is”. His deadpan expression drew a large laugh from the crowd.
Ishiyama had played against Ponsonby on that day. After the charity event finished, I mentioned the estimated crowd number of 15,000. Did he remember?
“Might be a bit of an exaggeration. There weren’t any proper grandstands, you see,” he explained. “But people were packed in tight, right up to the touch line, to the point where we had to be mindful not to bump into them. I’m pretty sure they could hear the sounds of us breathing and colliding with each other.”
The current crowd estimate was based on the numbers reported by “Rugby Nippon Ichi”, a commemorative magazine published in March that year by the Kamaishi Steelworks General Affairs Department’s Labour Division. There it had recorded a statement from a local policeman and security officer, estimating “somewhere between fifteen to seventeen thousand people”. The number of those watching the game from the roofs of neighbouring apartment blocks “must have been over two thousand”, while a post-match report stated “The crowd of 6000 held their breaths”. 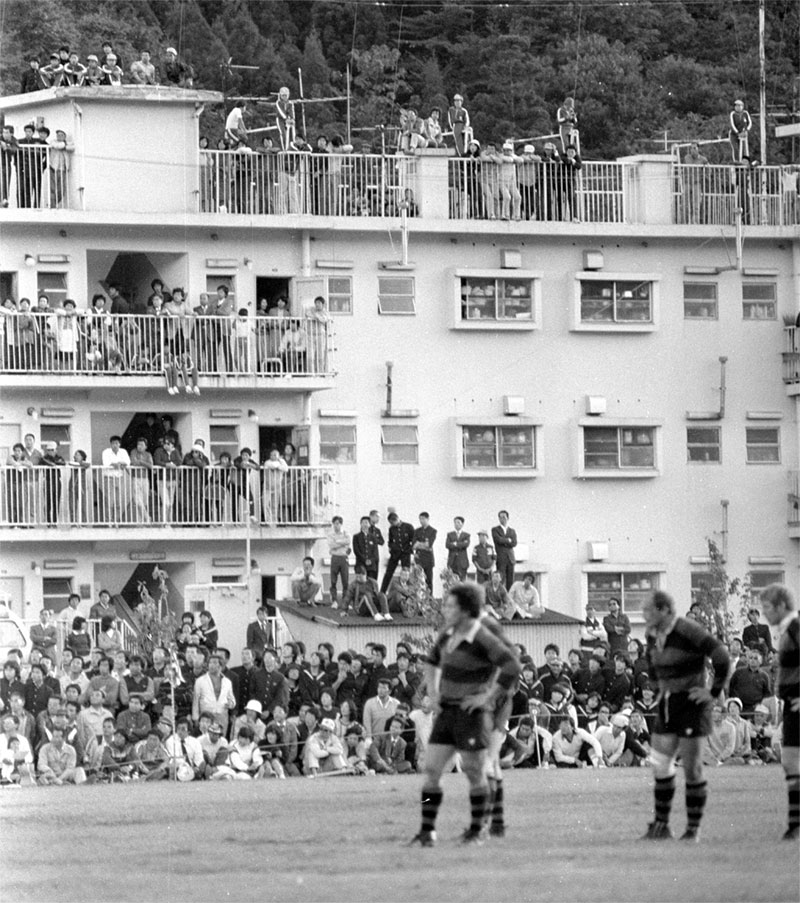 Ishiyama spoke of the crowd that day saying, “I’d invited my parents from rural Akita Prefecture, but they couldn’t even get into the sports ground. Having said that, they aren’t the types to try push through other people and were at a bit of a loss. Luckily a friend of mine from work saw them and helped them through. I mean, a foreign team playing in Kamaishi! Even I was beside myself with excitement. Bryan Williams was there.”
The latter was the legendary All Blacks runner. He could move at the speed of a table tennis serve, leaving any would-be tacklers in his wake, and had scored 10 tries out of 38 test matches. A lawyer of Samoan decent, he was the full-back that afternoon.
Peter Fatialofa was the tighthead prop forming the scrum against Jiro Ishiyama. “He was the toughest opponent out there. You’re either born with that kind of strength or not – I was very envious.”
Fatialofa would go on to make an impact as the captain of West Samoa during the second-ever Rugby World Cup ten years later. In a local television interview, he remarked, “My job is transporting pianos, so I don’t need to bother with weight training.” While in Japan on the rugby program he served as the team driver. On the Japan side, the revered loosehead worked at the steelworks maintenance division.
The Ponsonby coach was a man named Maurice Trapp, who was the head of the Auckland team from ’87 to ’91, leading them to a victory of 86 wins out of 90 games, with only three losses and one draw. He also made a name for himself as a successful businessman.
Number 13 was Joe Stanley. He went on to join the All Black five years later and was on the champion team in the first ever Rugby World Cup.
Toru Wada, Koji Horaguchi, Michihito Chida, Yuji Matsuo, Shigetaka Mori, Naoyuki Tanifuji, Toshiaki Konno as kicker… The Kamaishi team put up a good fight. 6-0, 6-3, 6-9, 13-9, 13-15, 13-19, like a seesaw, only losing by a small margin.

In the amateur rugby days, the whistle that ended the match meant the start of something else. Socialising with the away team was the real aim of the game. “We started off at the hotel, then broke off and moved on to the bars of Oyafuko Street.” Ishiyama and his group drank at Silk Road, a small snack bar. As they sat shoulder to shoulder, everyone’s laughter filled the Sanriku night air. “Thinking back on it now, it was the ultimate joy. Getting to play rugby in Kamaishi against a team from New Zealand – and having that many locals come to watch.”
The crowd numbers were written on magazine pages in ballpark figures of ten thousand, estimated by a straight-laced policeman to a straight-laced editor from the General Policy Division. No tickets were sold, so there is no way of knowing the real number for sure. So let’s just leave it at this.
Once upon a time, the All Black’s biggest stars came to Kamaishi, and an astounding number of people sat upon the grass. The bars in town were left with empty fridges.

※This article was published on 25 March 2015 in the May edition of “Rugby Magazine” and republished here in full with permission from Baseball Magazine Co., Ltd, and author Dai Fujishima. We thank them for their cooperation.