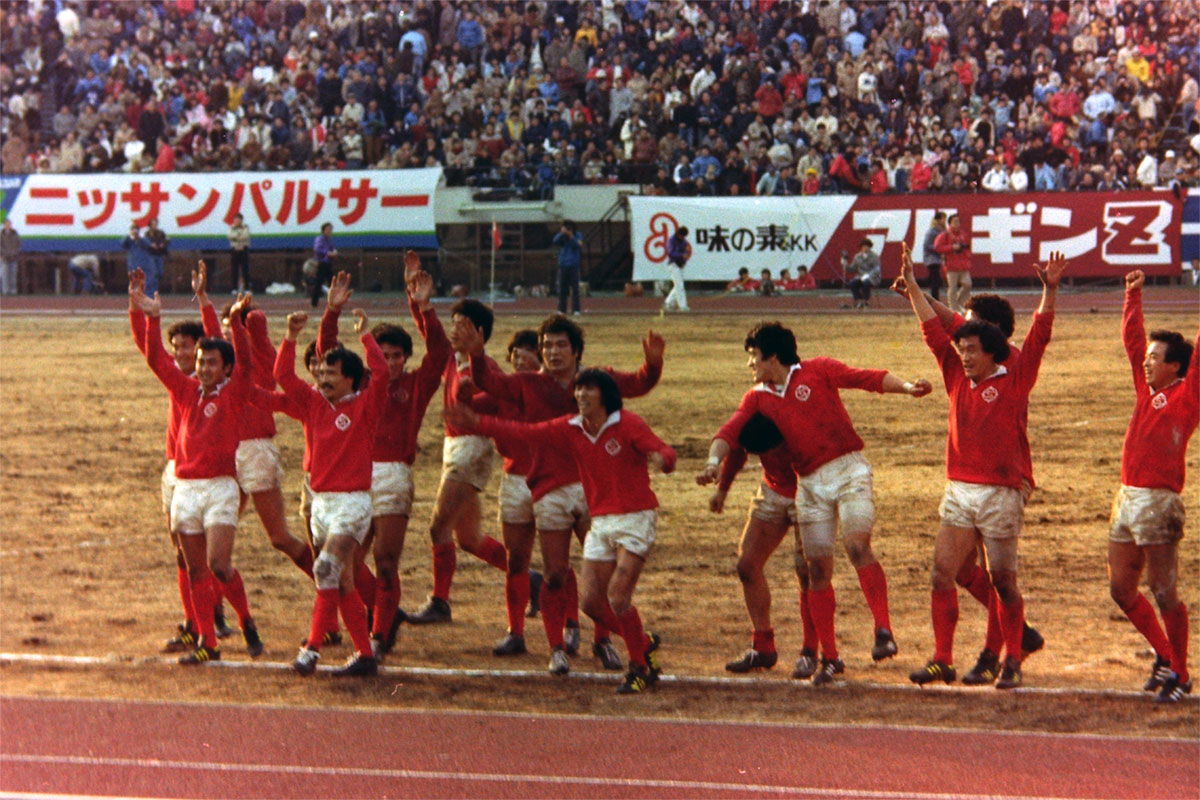 Kamaishi was first recognised as a “rugby town” in the early 1980s, thanks to the national fame of one team. The Nippon Steel Kamaishi Rugby Football Club.

The team accomplished an unprecedented seven straight championship victories in the All-Japan Rugby Football Championship from 1979 to 1985, earning themselves the nickname “The Northern Iron Men”.
As of 2018, only two teams have reached this impressive milestone – Nippon Steel Kamaishi and the Kobe Steelworks Rugby Football Club (1988 – 1994), which only goes to show the difficultly and brilliance of such a feat.

Although a great many of the team’s athletes went on to become members of Japan’s national side, the team did not start off with a line-up of star players. With a policy of gathering athletes who had graduated from high schools in Tohoku or Hokkaido, they were able to cultivate their talent by beginning with thorough foundational training.

In those days, company teams did not grant their players professional contracts, so athletes had to maintain jobs and training at the same time – more often than not working for the company to which the team belonged. One former player reflected on those days, saying, “I had to lift heavy objects for work, so I chose to think of my job as a part of my rugby training.” Those who grow up in the Tohoku region are known for this kind of toughness of spirit. 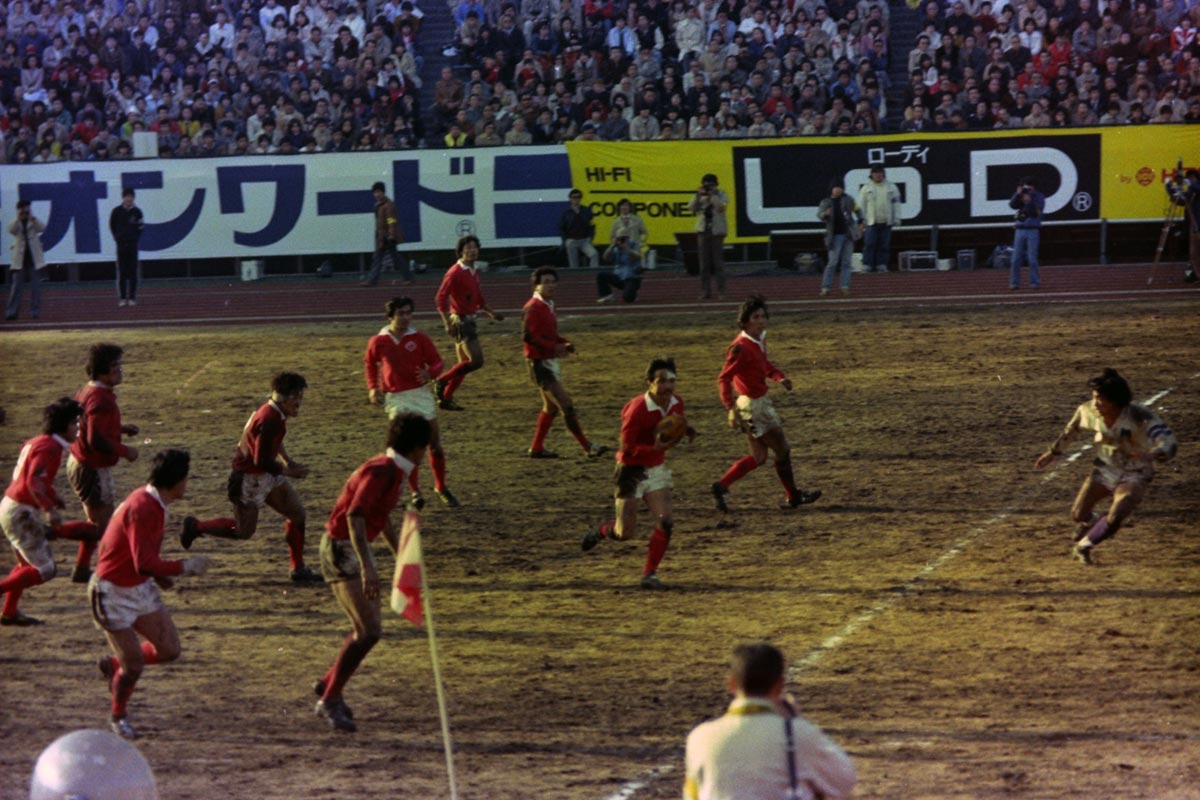 The All-Japan Rugby Football Championship was held every year on January 15. Countless busloads of supporters would leave Kamaishi the night before, travelling overnight to arrive at Tokyo’s National Stadium.

As the venue for these matches, the stadium would be filled to its capacity of 60,000 spectators. From the stands, the Kamaishi supporters would wave large tairyobata, otherwise known as furaiki flags (traditionally hoisted above fishing boats to signify a large catch had been made for the day), as they cheered on the players. This became the signature style for Kamaishi rugby fans, and the colourful flags are still brought out at rugby games today. 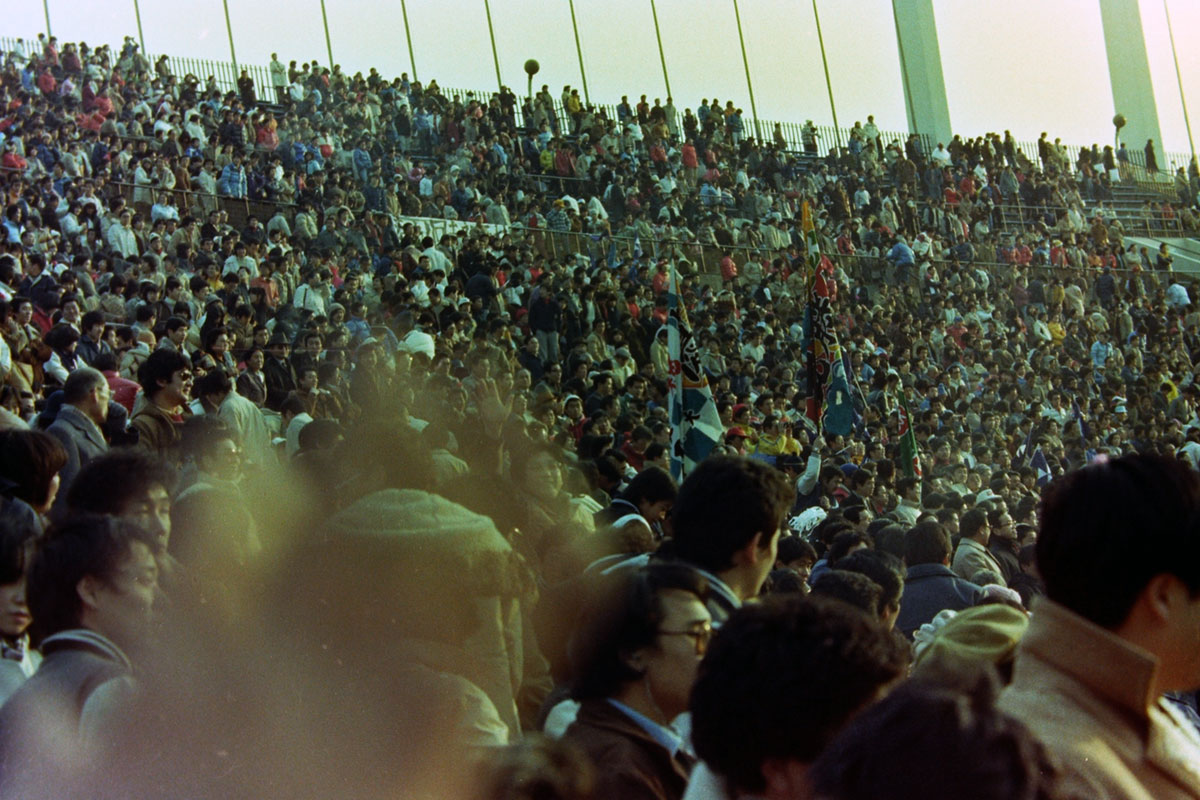 Whenever they won the championship and maintained their position as the number one team in Japan, the players would be welcomed home with a huge parade. A massive crowd of supporters, young and old, would gather to celebrate as the team made its way from the centre of town to the end point in front of the Nippon Steel Kamaishi Steelworks. The players were elevated to great heights in the proud hearts of the local citizens, and became known as the “V7 Warriors”. 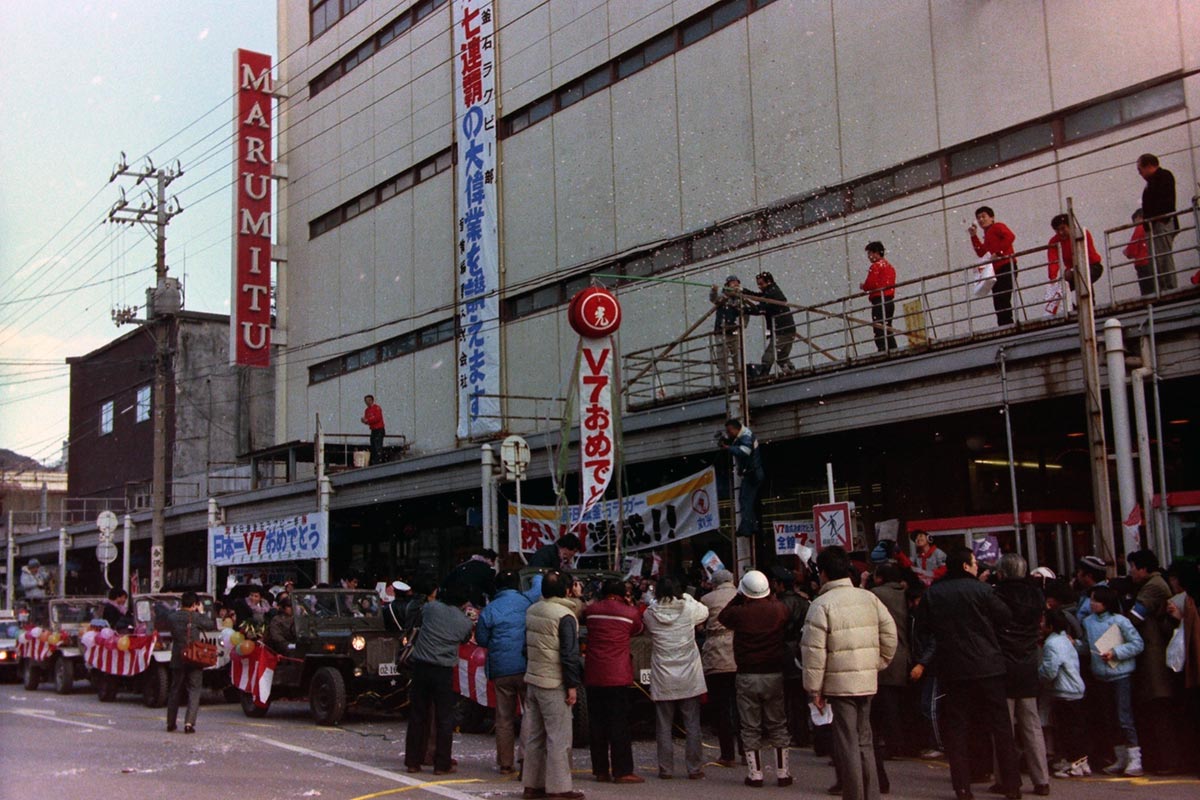 However, after those seven victories, the team’s results began to decline from 1985 onwards. After only just managing to remain in the league through the play offs, they were eventually dropped to the lower division in 2000.

This just so happened to occur at the same time as the decision to cut the independent management of the Nippon Steel inner-company sporting division. Although many feared that this would be the end of Kamaishi’s “rugby town” history, the club was reborn through the establishment of a new, community-based team, to be known as the “Kamaishi Seawaves”, and the pride and tradition of Kamaishi Rugby continues to this day.

Supporters and fans of Kamaishi rugby are spread all throughout Japan. Whether the match is held at home or away, Seawaves’ supporters gather in great numbers to cheer on their beloved team and wave furaiki flags, no different from the level of enthusiasm and support of the past.

This style of support always comes as a surprise to the opposition. “The support for the Kamaishi team is tremendous. We are a little envious”. The Kamaishi players never take it for granted, often saying, “We are fortunate enough to have the best supporters in the country”.

Through hard work and the support of the people, Kamaishi Seawaves were on their way to the Top League, the highest level of rugby in the country. However, in 2011, the year of their 10th anniversary, Kamaishi was suddenly struck by the Great East Japan Earthquake and Tsunami disaster. The disaster brought their practice sessions for the spring rugby season to a temporary halt. The players instead led volunteer activities and distributed relief supplies. They told the locals to, “Leave the heavy lifting to us”. They were highly commended for their contribution.

Additionally, foreign players Pita Alatini, a former All Blacks’ player, and Scott Fardy, a Wallabies player who played in 2015 England World Cup, were urged to go home by their countries’ embassies, but instead chose to stay in Kamaishi to assist with the relief efforts. Their teammates and the people of Kamaishi were moved by their bravery and compassion. Kamaishi was truly a second home for these players.

Promotion to the Top League

Currently, the Kamaishi Seawaves are competing in the Top Challenge League, the second-highest level of rugby competition in the country below the Top League. However, their ultimate goal is to earn promotion into the Top League. April 25th 2018 will mark the club’s 17th anniversary and to celebrate, the players and their supporters would like to recreate the past and once again hold a victory parade in town. They won’t give up on their dream to play in the Top League.