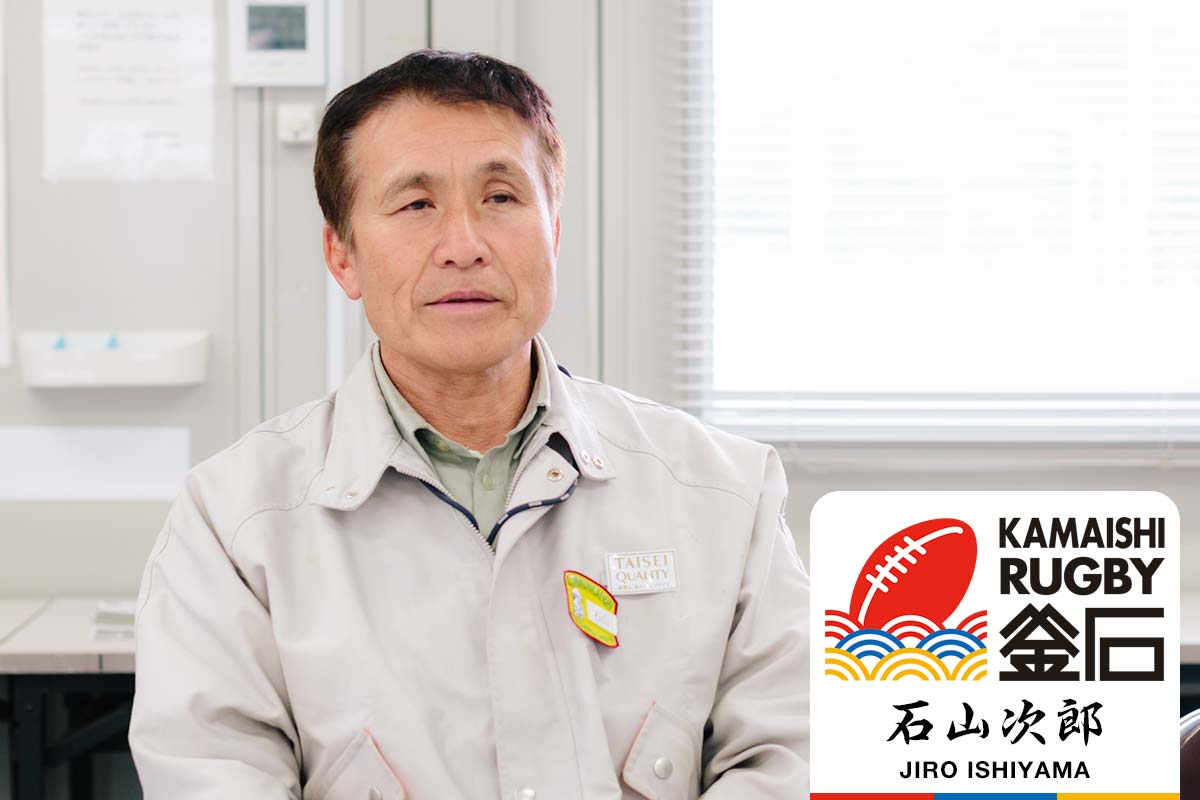 Born in 1957. After graduating from Noshiro Industrial High School in Akita Prefecture, he began work at the Nippon Steel Kamaishi Steelworks and joined the company rugby club. His playing position was loosehead prop. Ishiyama was a fixed, regular member of the team from 1979 – 1985, when they won the All-Japan Rugby Football Championship for seven years in a row. He also made 19 caps as a member of the Japanese National Rugby Team. He retired from rugby in 1988 and is now a representative of NPO Scrum Kamaishi, a non-profit organisation established by former rugby team mates and friends in the wake of the 2011 Great East Japan Earthquake and Tsunami.

In 1975, the Nippon Steel Kamaishi Rugby Coach, Mr. Nakanishi, came as a scout to my school in Akita Prefecture, Noshiro Industrial High School. However, he wasn’t interested in the rugby club, which hadn’t won one game in the prefectural tournament, but the national champion basketball club. He had come to recruit some of the “tall and quick footed” basketball players to the Nippon Steel Kamaishi Rugby Team. However, the rugby coach at the time put my name forward as “a good runner”. Since I’d been picked up by chance, rather than as a particularly promising athlete, I didn’t really join the Kamaishi team thinking, “I’m going be great”, so much as, “Oh good, I’ve found a job”.
At the same time, I did think it would be amazing if, one day, I had a chance at a selection team or even got to play for Japan.

When I joined the club, there were already several players who were also on the national team. Playing alongside them, I did start to think that maybe, “If I can be as good as these guys I might be able to play for Japan one day too…”.
Training was incredibly tough, and I had a hard time keeping up at first. Everything, from my speed, to my strength, to my body size, was wrong, and it was all I could do to just make it through a day’s session.
Under the dim lighting of the playing field, training always ended with repeated 30 second 200m sprints. Most of us were unable to walk by the time we were done – we’d just crawl on our hands and knees until we reached the goal line. I remember it all vividly.

With that kind of training, my physical condition improved and I become much bigger – I could even keep up with the senior team members. This showed me that I was levelling up as a player.
However, I’ve always been a negative thinker and before games I’d be worrying about things like, “What happens if we lose in the scrum?” and, “If the forwards get overpowered the backs will get pushed back”. I tried extra hard during training sessions to get over this anxiety. During the games I’d just try and put everything into the next move. To be able to do that over and over again, I had to develop an inexhaustible stamina. It was because of these efforts, I think, that I was often praised for being an athlete that “puts in the work, whenever and wherever he is”. 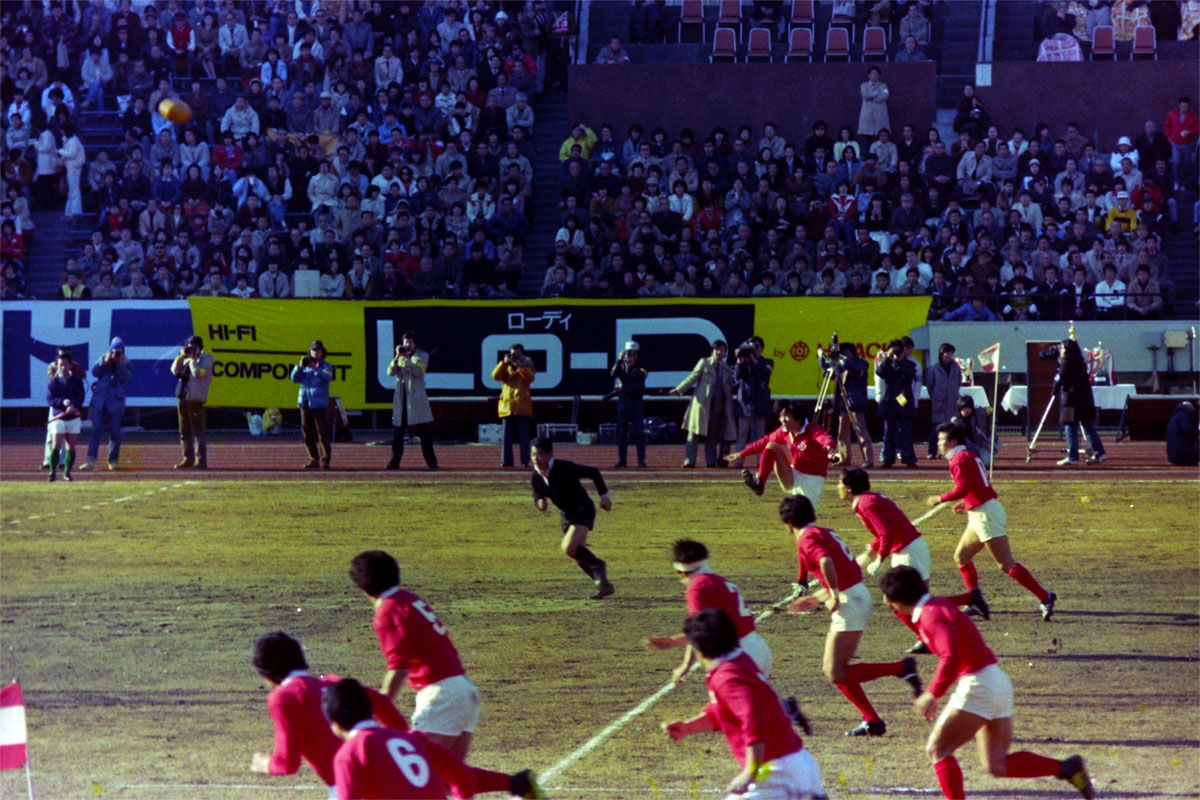 1976, the year I began with the club, was the first time we won the All-Japan Rugby Championship and became the number one team in Japan.
After I became a fixed player in 1978, we went on to achieve another seven championship victories in a row, but I think that was just luck on my part. I got to play during the height of our success because of the hard work put in by the players above and before me.

I’ll never forget playing the All-Japan Rugby Championship grand final in front of a fully-packed National Stadium.
The first tairyobata(*1) I saw in the crowd was the “Victory-Maru”(*2) . I remember being surprised that there was really a boat in Kamaishi with that name. I’ll also always remember the victory parade that was held in Kamaishi upon our return. The locals had dropped everything to line the streets, cheering for us with huge smiles on their faces. There were even people waving from their windows and throwing confetti. Although a little embarrassed at the time, it was also the happiest I’d ever been. I wish I could go back and see it all again. 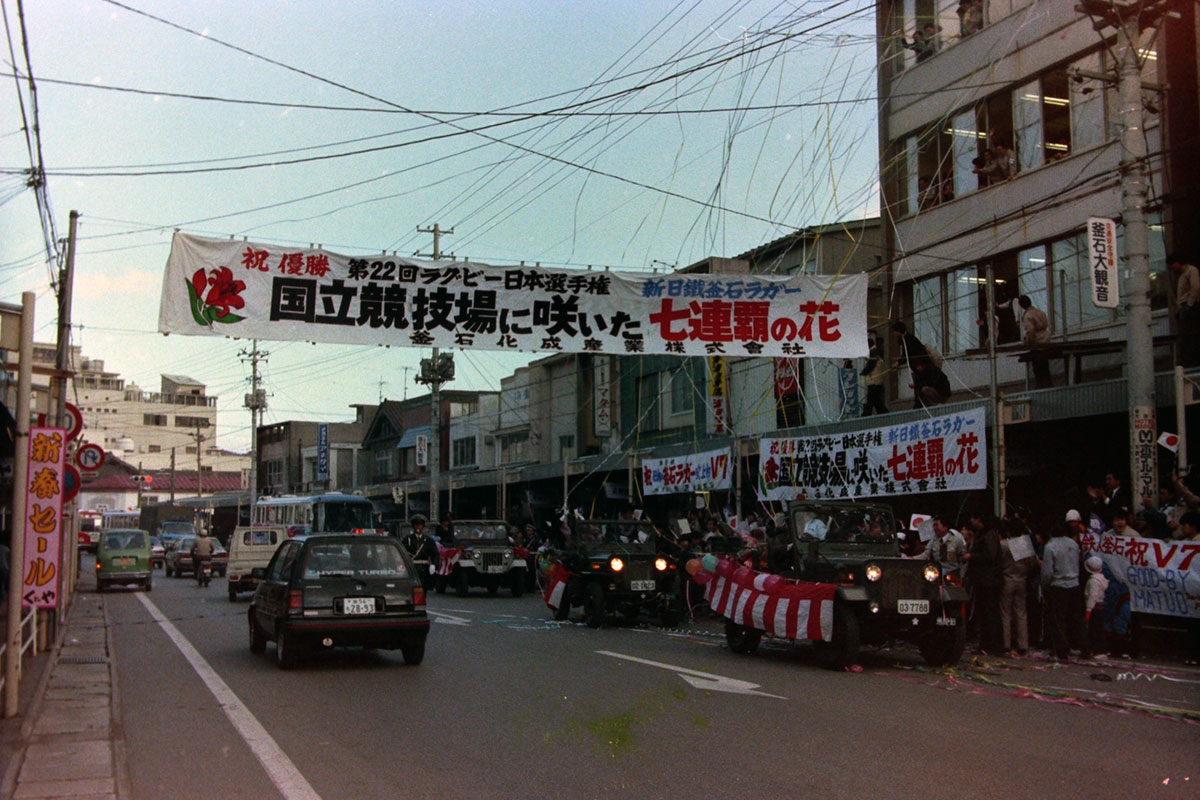 *1. Colorful flags traditionally hoisted above fishing boats returning to harbor to signify a large catch had been made that day.

*2. The suffix “maru” is traditionally added to the names of Japanese merchant boats.

I wouldn’t be who I am today if it weren’t for my time in Kamaishi.
Ever since leaving the club I’d wanted to give back in some way but, before I knew it, years had passed. Then the earthquake and tsunami hit and I thought, “I have to do something!”

On March 11 2011, I was way down in Shizuoka but, even there, you could still feel the earthquake. Having lived in Kamaishi, I immediately thought of the tsunami danger and evacuated to a hospital on higher ground. Once there I watched, unable to believe my own eyes, as TV footage showed the tsunami attack the Tohoku coastline.
Afterwards, I asked around to see if there was anything I could do, as I still had a lot of rugby connections. Two weeks later I heard that the Tohoku Expressway was finally reopened, so I packed my car with containers of kerosene and everyday necessities, and drove all the way to Kamaishi. I went around to all the evacuation centers in Katagishi and the middle of town, where I found many of my friends.

In May 2011, I met with the General Manager of the Kamaishi Seawaves, Yoshiyuki Takahashi, and after talking about the state of the team, we began to discuss what could be done to help the recovery effort. “The Rugby World Cup is going to be held in Japan in eight years’ time, do you think we could hold a match in Kamaishi?”. We thought that hosting the cup might bring new hope to the city.

hold a match in Kamaishi?”. We thought that hosting the cup might bring new hope to the city.
However, it didn’t feel like the right time to broach the subject, and we didn’t want to burden the people of Kamaishi, so we began by gathering friends and acquaintances from outside the city to start the campaign. I remember a lot of people telling us, “You can’t do that,” or, “That’s impossible”. Then, at the Host City Candidate Seminar, we were told that the official stipulations included a condition: the host venue should be in a meaningful location. “Well then, Kamaishi definitely deserves to be considered!” I thought.

Four months after the disaster, I took my proposal to the Mayor, Mr. Takenori Noda, asking him, “I want to put in a bid to host the Rugby World Cup in Kamaishi. Is it okay if those of us outside the city get started with the process?”.
The Mayor was completely baffled at first, but said he was grateful that everyone wanted to help.
From then on, I gathered together the members of an NPO (non-profit organisation) set up by the rugby community to aid the disaster recovery, and we began working towards the host town bid. The more progress we made, the more local citizens in Kamaishi came on board.

Eventually, we joined with Iwate Prefecture and together achieved the official host city selection. I later heard that, when the selectors went to visit Kamaishi, they were very impressed by the wonderful presentation given by the city. I think they must have been won over by the people of Kamaishi, the creativity of the host bid staff, and everyone’s raw enthusiasm. 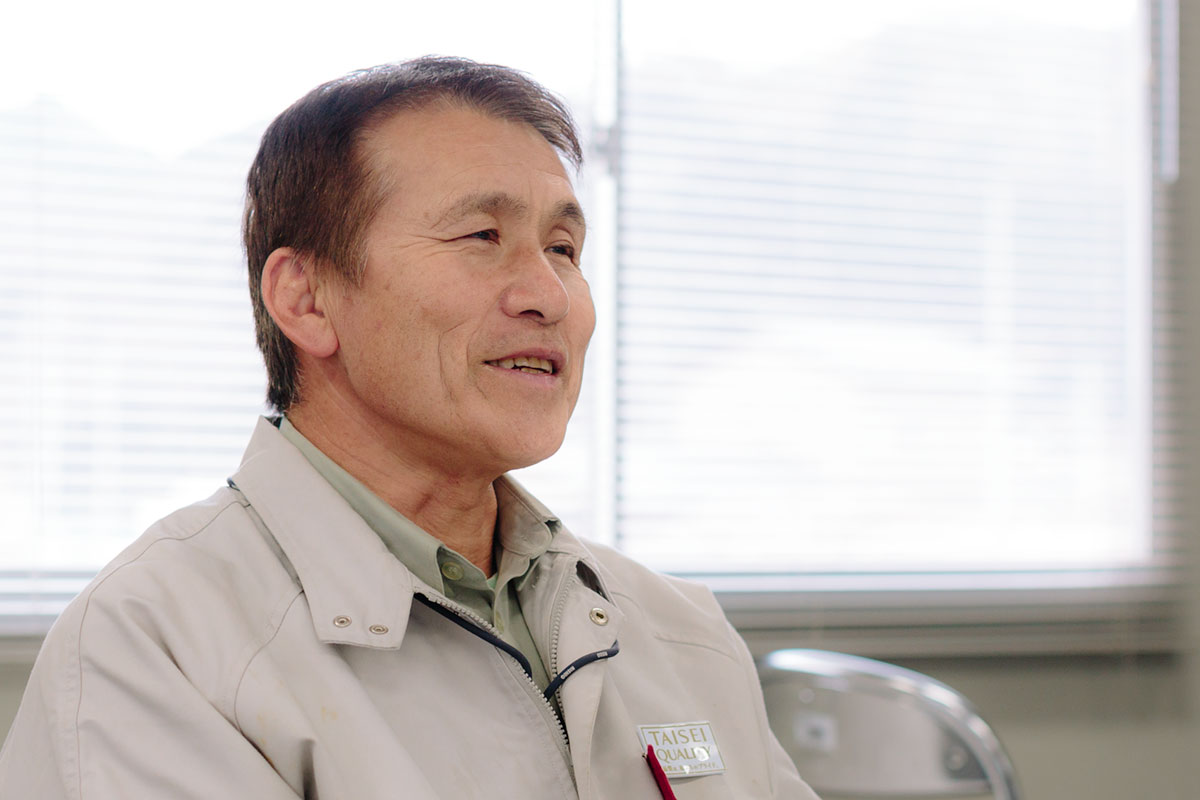 Now (as of March 2018), I’m working at the construction site for the Kamaishi Recovery Memorial Stadium (prov. name). As the “main culprit” behind the host city bid, I wanted to help out in some way, and one of my rugby friends found me a place there. 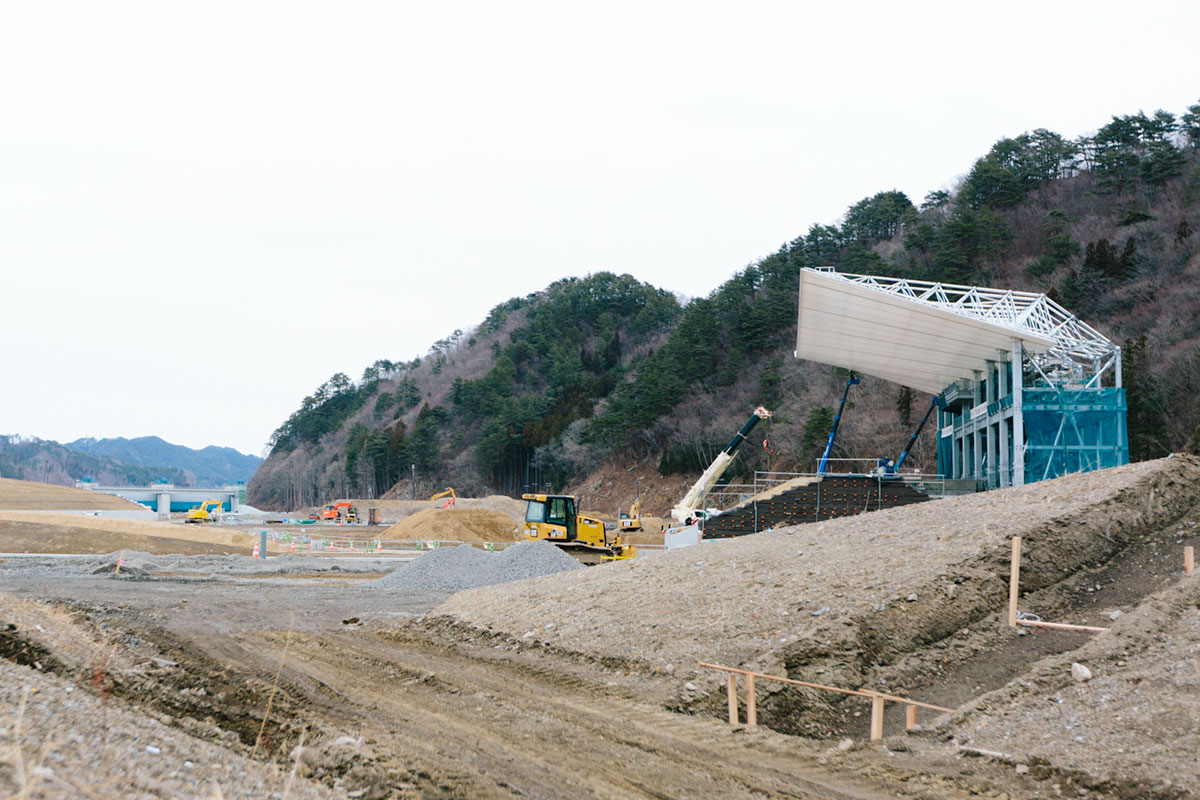 Construction is scheduled to finish in the summer of 2018, but my contract will end slightly earlier. Although I’d love to be in Kamaishi to enjoy the atmosphere during the World Cup, I’ll probably stay away. Why? I seem to bring bad weather with me wherever I go, and if I’m there it will definitely rain. I want the matches to go ahead under sunny, blue skies.
I’ve done everything I can, so from here on out it is up to the warm hearts and wonderful hospitality of the people of Kamaishi to make the tournament a success.
I hope the stadium will come to symbolize the end of Kamaishi’s pain and sadness.