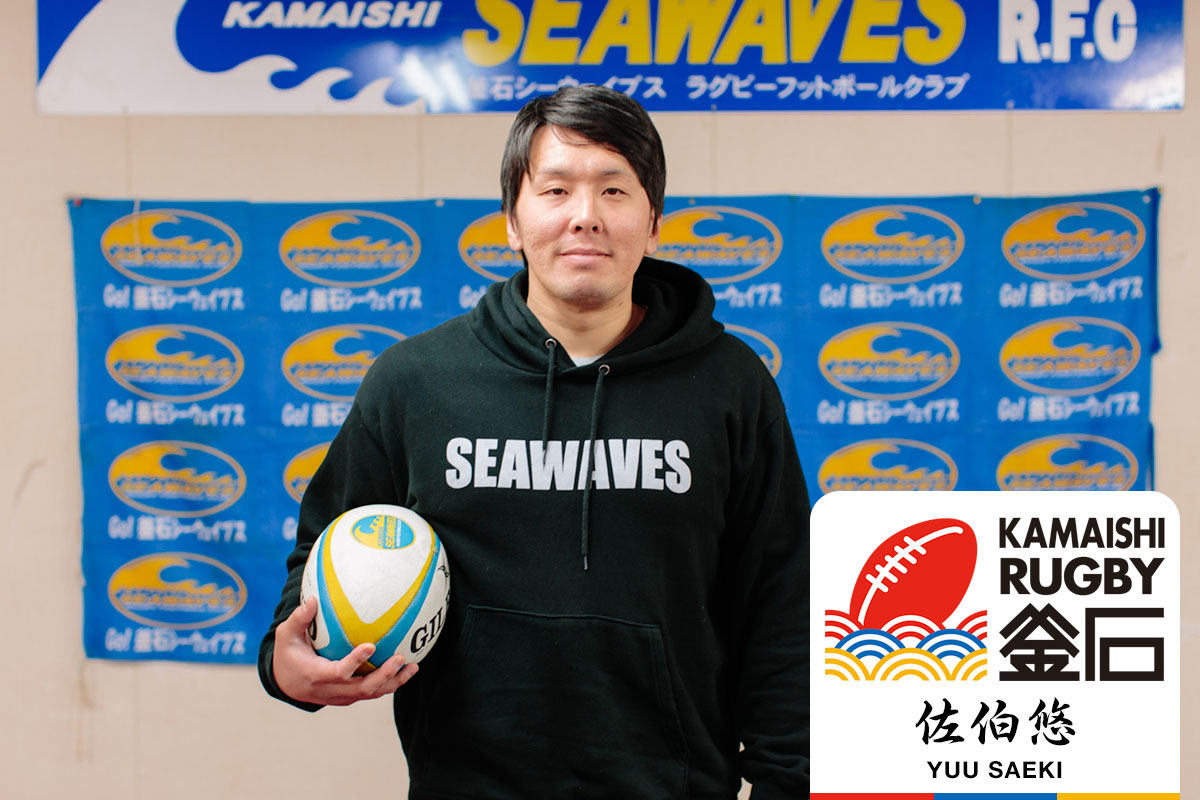 Born in 1985, Saeki joined the Kamaishi Seawaves RFC after graduating from Kanto Gakuin University. His playing position is flanker. He was team captain from 2011 until the 2013 season and is currently serving a dual position as a player and coach.

My father encouraged me to begin playing rugby when I was in 5th grade at elementary school, and I fell in love with the game immediately. I remember thinking “Wow, rugby is so much fun!!”, and that feeling hasn’t changed since.

I have one particularly unforgettable memory of Kamaishi Rugby from my Kanto Gakuin University days. During my fourth year, after winning two consecutive university championship titles, we had a friendly match against Kamaishi in Yokohama. It was my job to organise the accommodation facilities, and I made a reservation with a simple business hotel close to the station. However, when I told my coach, he was furious. “The Kamaishi team is coming all this way, what on earth are you thinking?!”
I hurriedly changed the booking to a much nicer hotel.
Apparently, back when Kanto Gakuin was still a weak team, the superior Kamaishi side had agreed to train with them on several occasions, which had a huge impact on the team’s improvement. “We have owed them a huge debt ever since. It’s time we returned the favour,” I was told. From then onwards, I thought of Kamaishi as a very impressive team.

I reconnected with Kamaishi again the very next year, when I participated in a Rugby 7s tournament hosted by the city. While there, I was invited to come play for Kamaishi full time. Having no knowledge of the city, nor any personal connections there, I couldn’t quite make up my mind and ended up returning home undecided. However, not long after, Mr. Ikemura, the head coach at that time, came to visit me at my university. He spoke to me of the challenges being faced by the Kamaishi Seawaves club team, and I became more and more excited at the prospect of such an interesting experience. Once I made the decision to go, I had no more concerns about moving to an unknown city and balancing rugby with full-time work. I will be forever grateful for the opportunity to live somewhere where I could hold down a decent job while also playing my beloved sport. 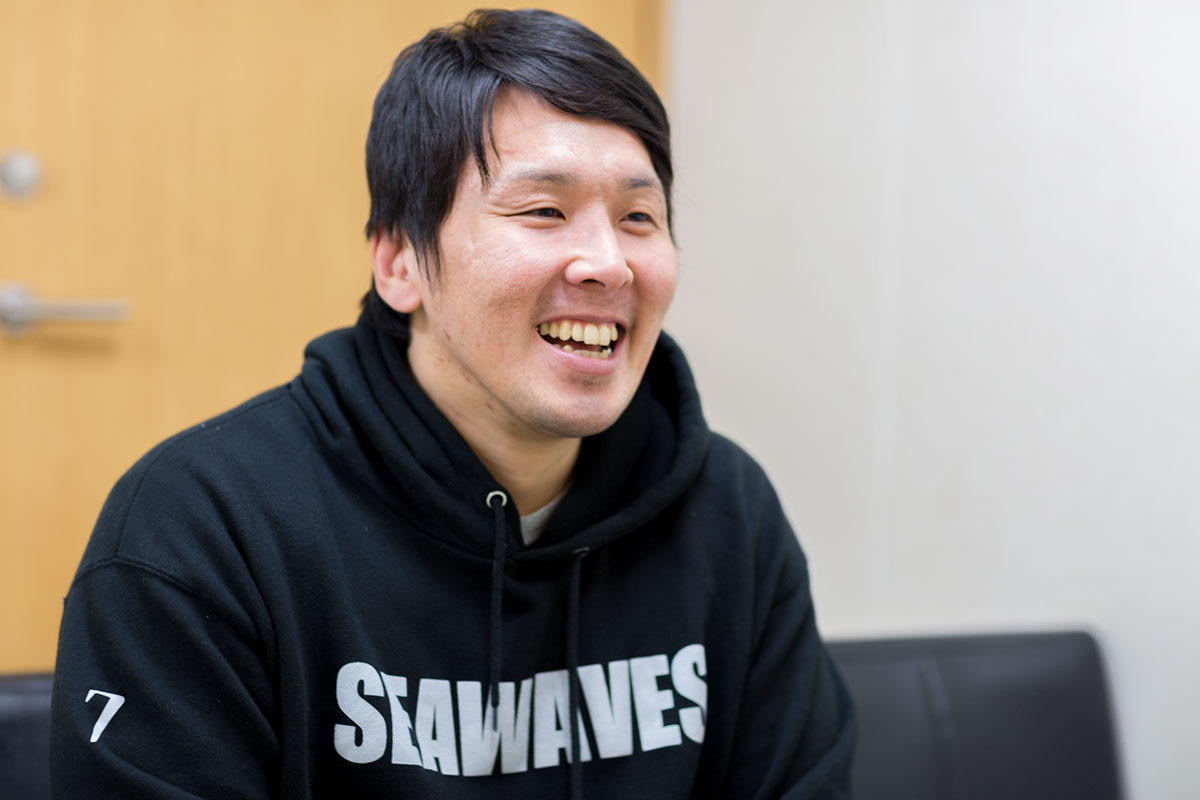 The Great East Japan Earthquake and Tsunami disaster occurred in 2011, during my fourth year with the club.
I escaped to safety on higher ground, but my workplace, located in the center of town, was destroyed. Watching as the streets were swallowed up by the tsunami, I thought Kamaishi was finished.

Although the tsunami didn’t come as far as the area where the team was based, all power, gas and water supplies had been cut off, so the players and their families took refuge in the club house together. It took us the entire next day to confirm the safety of all the athletes and staff.
Two days after the disaster struck, the foreign players suggested going into town saying, “We might be able to help anyone we find along the way.” So they headed off in the direction of the city, returning with grief and heartbreak written across their faces. “It’s really bad…”.

After we heard what state the city was in, someone suggested we volunteer ourselves to help. We went around to various places saying, “We have a team full of young, strong men. Is there anything we can do?”
We helped out at the hospital by moving beds and oxygen tanks to the lower floors, then transported aid supplies into the disaster area.
As time went on, people’s needs changed. We heard that the kids from the evacuation centers were suffering from a lack of exercise, so we invited them to the rugby grounds to play with us, then have a bath and hot a meal at the club house. Seeing the smiles on their faces gave our spirits a boost too.

Despite everything, as we continued with our volunteer activities, locals would call out to us, “What’s happening with the rugby? Aren’t you playing?”
“Not sure…this isn’t really the time to be playing rugby…”, we answered, only to be told, “This is exactly the time for the Seawaves to be playing rugby! We need something to encourage us!”
Upon hearing these words, we thought, “Right! We should do what only we can do – rugby!”
With that, any misgivings we had suddenly vanished.

We weren’t even sure if we’d be able to play that season, but finally, in April, news came that team activities would resume from May onwards. It was a huge relief for us all.
Once we started playing again, we gained a lot of new supporters and received many generous donations as well, for which we were very grateful.
Throughout that year I came to the realisation that even if we wanted to play rugby, that desire alone didn’t necessarily mean we’d be able to. I also felt that we needed to become a stronger and better team for all those who were supporting us. The other team members said the same.

Living together so closely in the club house after evacuation created a strong bond between us, and the team become one like we never had before.
Although there had already been discussions about me becoming team captain at the end of the last season, I had initially refused. The previous captain had been former All Blacks player, Pita Alatini – an amazing man and incredible athlete, whose shoes I didn’t have a hope of filling.
Yet when I was approached again, after everything that had happened, I accepted. I’d never been a team captain before and, to be honest, I had no idea what I was supposed to do, but I was determined to do my best and to be true to myself. Besides, each and every player was putting in their best effort, so I don’t remember having to try too hard to unify the team – They were a huge help.
I had a lot to think about that year. Time and time again I asked myself things like, “What does it mean to play rugby for this town?” and, “What kind of team should we be?”. Considering the answers to these questions had a positive effect on me, and became an important asset for the team.

Everything was extra special that season, and we were just so grateful to be able to play. That was the year I discovered the joy of rugby all over again.

In 2017, we advanced to the “Japan Rugby Top Challenge League” for the first time, but unfortunately came in seventh out of eight teams. There were so many matches where we only lost by a tiny margin, but that lead to a significant gap in the final results.
What are we missing? In order to advance to the top league, each individual player must figure that out within themselves.
Personally, I wonder whether we have a strong enough idea of, and proper respect towards, the true culture of Kamaishi Rugby. As someone who has played for this team for such a long time, I regret that I’ve failed to pass that on to my other teammates. For the younger players who did not experience the disaster, it is up to me to make sure they know that our current situation cannot be taken for granted, and that we couldn’t play at all if it weren’t for the help of the background staff, sponsors, and fans that support us.

The Rugby World Cup 2019™ in Kamaishi 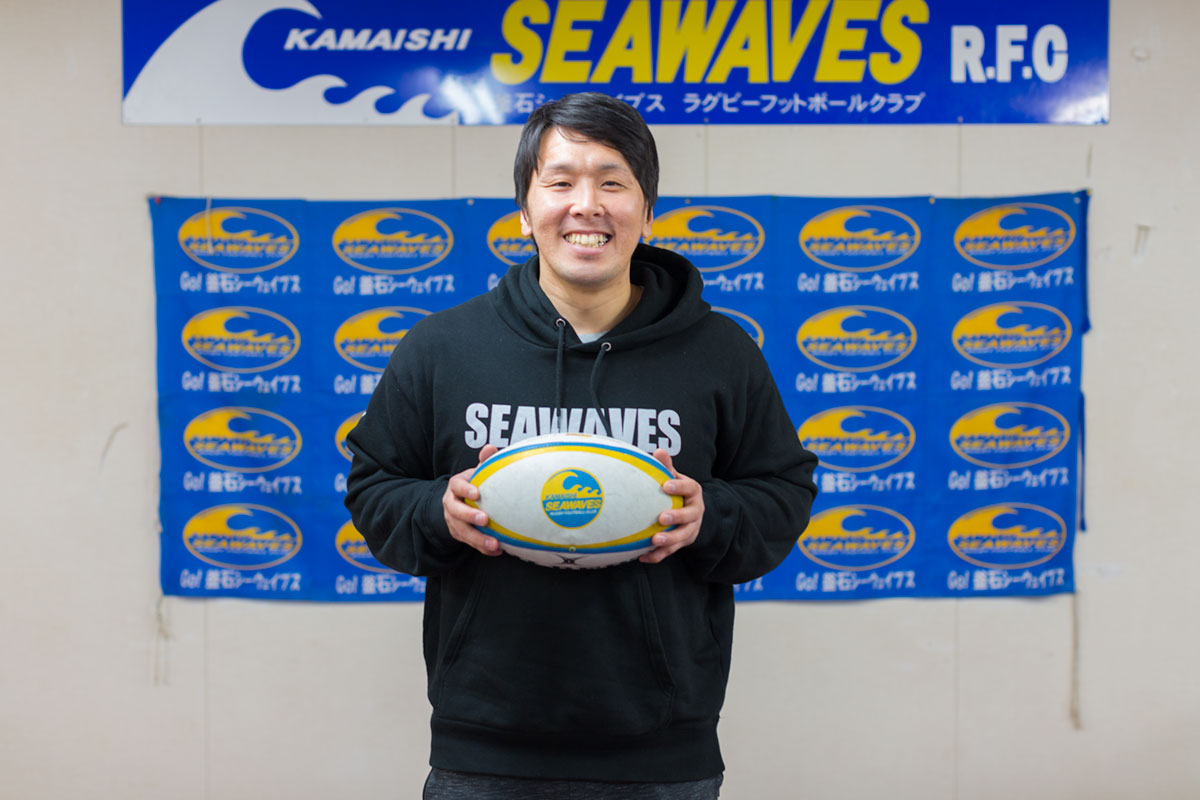 I’m so excited for Kamaishi to host the Rugby World Cup. This is a once-in-a-lifetime chance for a regional city to host such an event, and I hope I can watch it alongside everyone else in the stadium.
It also makes this year crucial for the Seawaves. When I wonder how we can encourage more general interest in rugby, I think the most simple but effective means is to become a better team ourselves. It would be a big deal if we made the top league, right? I think more people would take interest in the World Cup too if we did, and that motivation will help us take it that one step further.
As a member of the rugby community, I have to think beyond 2019 as well. It’s important to leave something behind after the cup, so we can pass on the host city legacy to the future of Kamaishi City.